Had a fun Saturday morning--

Compared to my 1090 R, the 790 R was compact, stable, and had great handling characteristics with a low center of gravity. I won't be trading in my bike (still love the feel and response of the V twin and the light handling, more wind protection, engine bars, etc.), but I can understand why KTM engineered the 790 Adventure bikes. Why not have a lighter bike with a great engine and superb handling characteristics?

I was able to leave with wallet undamaged. Not so sure about Mike...

Did you ride both?
Was there a significant difference between them?
Top

I rode only the R version, and sat on the non-R (which really felt too low for me saddle-wise, but that could be corrected). I also felt the 790 R felt slightly lower than my 1090 R, but not necessarily narrow in the mid-section of the saddle and bike. I personally found significant differences between the ride and feel of the 1090 R and the 1090 non-R (the suspensions really felt different, and I preferred the R version not just for off-road capability but the on-road feel).

My friend definitely found the 790 R version significantly too tall, and he found the ride and power and suspension of the non-R completely to his liking (coming from a Honda VRF 800 and wanting to do some light green lanes with his next bike, but retaining long-range road comfort and speed). It's worth noting the non-R doesn't have the Rally mode settings of the R version, but that can be added for like £180. The dealer said the entire front end (fender and I think even forks) could be put on the non-R from the R. My friend liked the front fender of the R version better and may have selected it to be put on the non-R he bought.

Here are a few more notes from the ride I put on a comment on my youtube channel:

If the prices were about the same, and I have 12k miles experience on the 1090 R, I’d go for the 1090 R again because the great feeling I had on the test ride is still there 12k miles later. On my last bike, I rode it for 3 years but was bored with it after six months. The 1090 R is far more challenging, and even if I ride another 48k miles on it I still likely won’t master all of its off-road capability. Keeps it interesting!

If the prices were the same and I had only an hour on both bikes, it might be a harder decision. The 790 R is easier to ride, and more compact. However, most of my big miles on are on motorways, and the 1090 R does great at speed with good wind protection. The 790 R is more exposed. If I were feeling like a challenge, it would be the 1090 R. If I were looking for more confidence sooner (for big-bike off road), it would be the 790 R.

Last, I have a 32 inch inseam. I think that’s the minimum for a 1090 R, even with a 20mm lower Touratech saddle. If my inseam were half an inch shorter, I would go for the 790 R or 790 regular. I rode the 1090 regular for a day, and I wasn’t taken by it. I think the 790 R or regular would be an excellent choice if I were shorter, since it has several options for lower seat height, even if it were more expensive.
Top

Excellent write up of the comparisons.
I have found a dealer with a 1090, but they are in Oslo, so no test rides. I had a go on 790 S, and as you say it felt
very compact which surprised me. However I prefer the stylig of the R.
So just waiting to hear from the dealer, hopefully before I go offshore for 2 weeks.
And if I don't like it, I can blame you...

I'm not in the market for a new KTM or anything else currently, but your write up and vid were ace. It would be great if bike forums had more of this type of quality content ! Thanx.
Top

I'm going to sound like the fun police now

I just don't get why people leave footage of bad riding in their clips, I'm sure without the 2 big no no's the short film would have been just as interesting and informative as it is, and before anyone mentions it, I know there are loads of clips of folk ridding about like loons, but when it's set up to be a review short film

on the subject of the 790 are there any owners out there?

reason is I've just finished the carbon/kevlar tank protectors--prototype(first out of the mould). They bolt on using the outside 3 bolts OVER the stock plastic to give an extra protection layer. The tanks are about 1k if you hole one. I'm looking for an owner to try them FOC and give a report with pics. I will supply this set FOC but of course a donation would be appreciated. They will retail on www.kodamacomposites.co.uk if ok --and at about £110 the pair. Its been a long road to get this far!

If you're coming to the ABR Festival you'll have the chance to test ride these bikes with the Sweet Lamb instructors.

thanks Alun--however, my local dealer has a test bike etc--hence the pics --used their bike to do a test fit. The 790 is far too expensive and ok as a road bike but the tanks and bashplate are fragile for genuine offroad (IMHO)--I'm sure that other stuff will be out soon--I'm just trying to provide some additional protection at a sensible price to add to our portfolio. I'm more than happy with my 600 transalp which actually does much the same as the 790 at a 1/10th of the price--and I do a decent carbon/kevlar bashplate for that as well---it may not be as fast, but is a great real world bike and will certainly handle fire roads(recent trip to Scotland)--and I reckon handles better than the 1050 Tiger I used to have. I'm sure the KTM is a great bike but I don't have that kind of disposable income to spend on a luxury--and even if I did I think that there is much better value out there--the 790 is at least a step in the right direction in that its not a lardy, heavy and over complicated lump that wouldn't look at any offroad except in really expert hands--I'll stick to my 250s for the proper trails thank you!
Top

catcitrus wrote:on the subject of the 790 are there any owners out there?

reason is I've just finished the carbon/kevlar tank protectors--prototype(first out of the mould). They bolt on using the outside 3 bolts OVER the stock plastic to give an extra protection layer. The tanks are about 1k if you hole one. I'm looking for an owner to try them FOC and give a report with pics. I will supply this set FOC but of course a donation would be appreciated. They will retail on www.kodamacomposites.co.uk if ok --and at about £110 the pair. Its been a long road to get this far!
Trial fit 2 10 June 2019.jpg
Trial fit 6 10 June 2019.jpg

Prospective owners listen up, these carbon/kevlar covers work. Consider it! 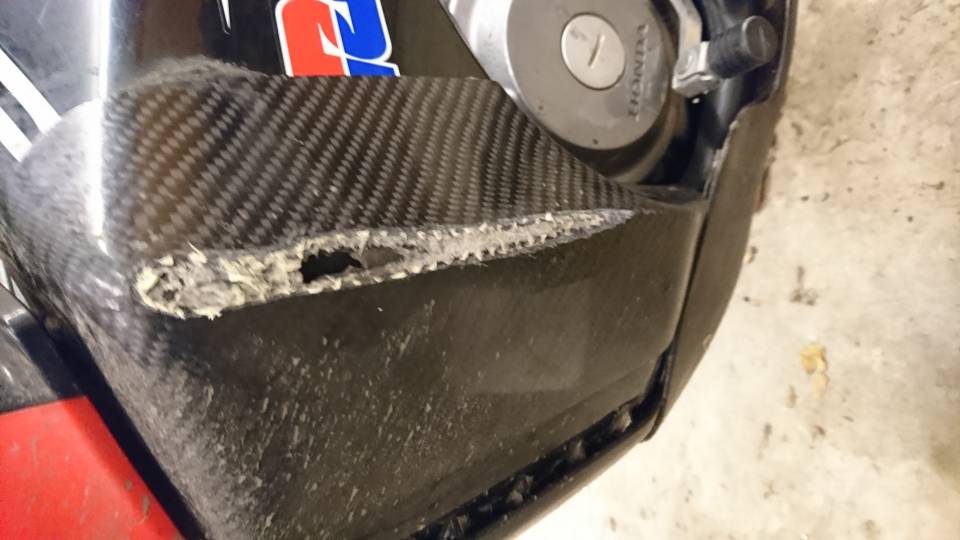 Sent from my H8416 using Tapatalk