A new member of our dirt gang has a CRF250L. He is still on the standard dual sport tyres and he struggled big time today in the mud. Sliding like crazy and no purchase at all uphill. He just span and span and stayed where he was...

I know several ABR-ites have CRFs. Any advice on what knobblies he should fit? And what sizes (front/rear)? Doesn't have to be tarmac legal, so any recommendations very welcome, and I'll pass them on.

Can't offer specific advice, other than someone had an issue with a knobbly of the 'correct' size fouling the swingarm...so check the true width across the widest knobs. With such modest output a wide tyre probably wouldn't be the best choice anyway.

This may be obvious, but security bolts and the ability to drop pressures are just as important as tyre choice...I've always found genuine Honda security bolts to be the best and most durable, even though I've never had a Honda dirt bike (well I did buy a project XL185, then two days' later my mate's bike - his only transport - blew up, so I gave it to him for what I'd paid for it).
Top

Richard Simpson Mark II wrote: ↑
Sun Jan 17, 2021 6:03 pm
Can't offer specific advice, other than someone had an issue with a knobbly of the 'correct' size fouling the swingarm...so check the true width across the widest knobs. With such modest output a wide tyre probably wouldn't be the best choice anyway.

Absolutely. My Beta 450 came new with a 140 rear, but I never use bigger than a 120, and usually a cheapo 110. As you say, sometimes the fat tyres can foul the swingarm. But mainly, it's irrelevant to a nobhead mudplugger like me. I could have a wagon wheel on the back and it probably wouldn't make any difference. A wooden one or a chocolate one.

Remember them? They were nice. Can you still buy them? 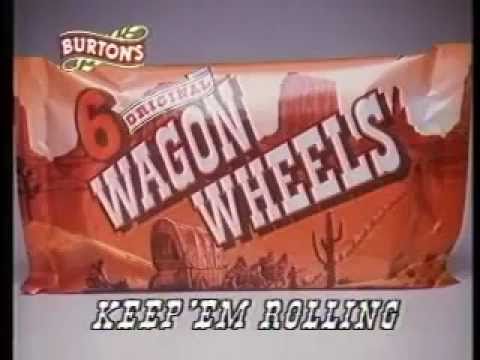 thres so many choices out there ... maxxis ITs work pretty well ..but if fitting a full enduro rear it well better to settle on 110 /90/18 s theres not a big amount of clearance to the swingarm depending on chain length /gearing a 110 is pleanty of tyre on the rear of the crf ..some 120s may want to eat the catflap fronts 90/90 90100 doesnt matter a lot tbo

110s are big enough on the crf for sure 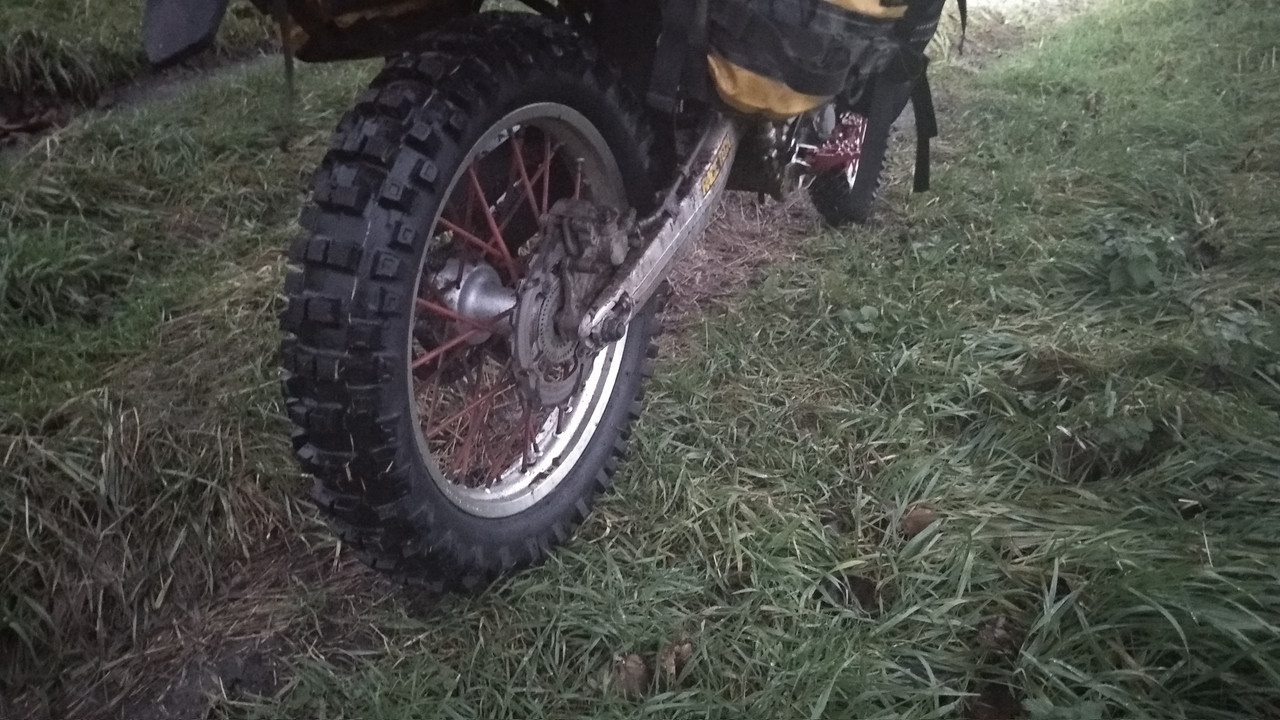 to finish up the appraisal

to start the appraisal

.. the original tyres have a relly bad reputation, but i found them really good on the road, and lasted well. But .. off road they are treachorous, the front is bad, but the rear is deadly, as matey found out. They slip and slide sideways and all ways in slippy conditions, tho not too bad in the dry.

I tried mitas E09's anf they were fine on dry track and roads, great on roads in fact, but they have a lot of land to sea tread.... small gaps in large knobs. but they would foul up at the slightest sniff of mud ... and o boy .. watch out for the side slips, as there is a straight through gap/s in the tread pattern.

The weight of the crf 250L, at 145kg makes the tyres dig into soft ground more, causing easier slip, as the earth turns to mush under the weight.. 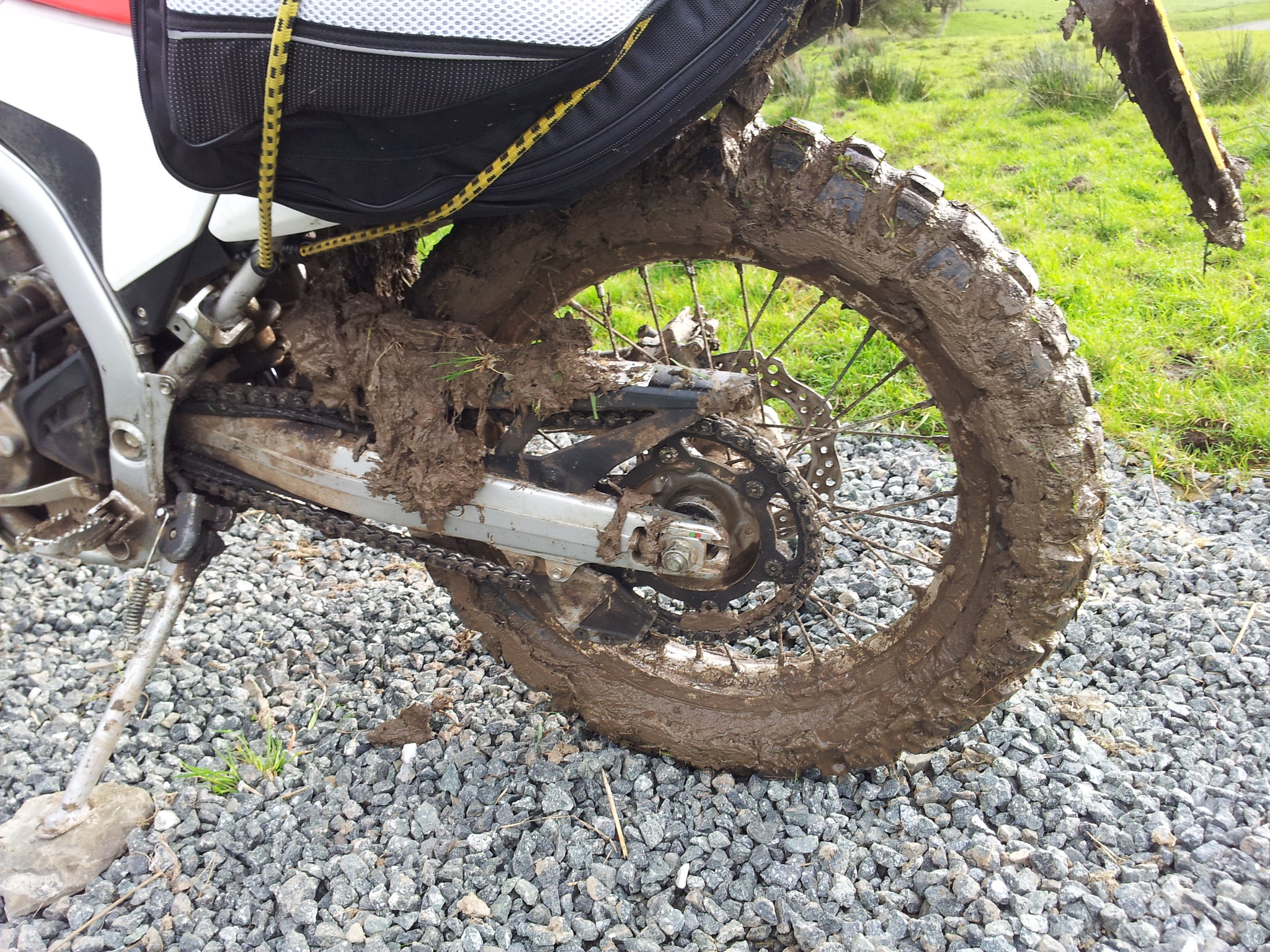 
so i tried metzler (cant remember name .. uni something? unicross?). I put one on the rear 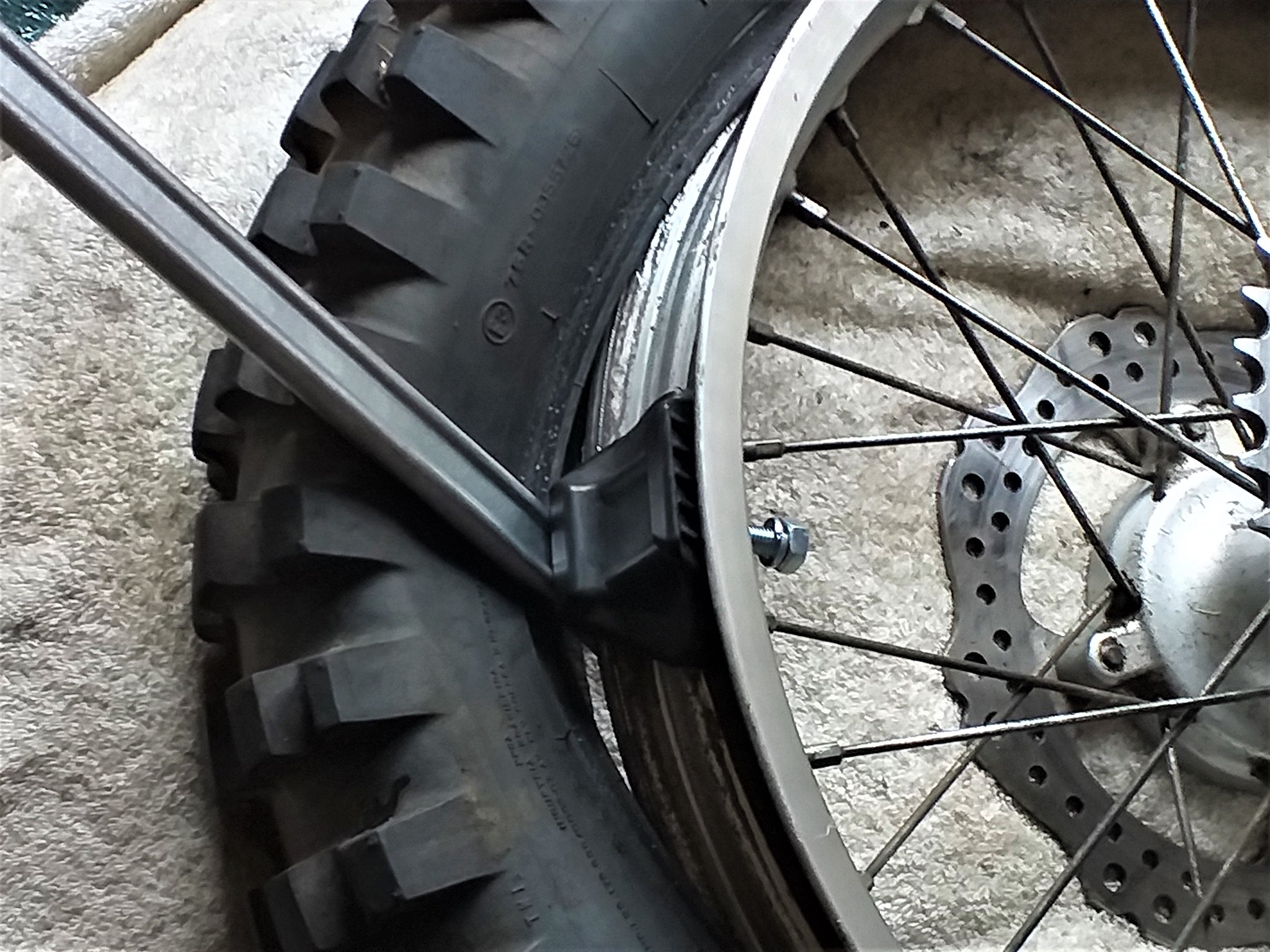 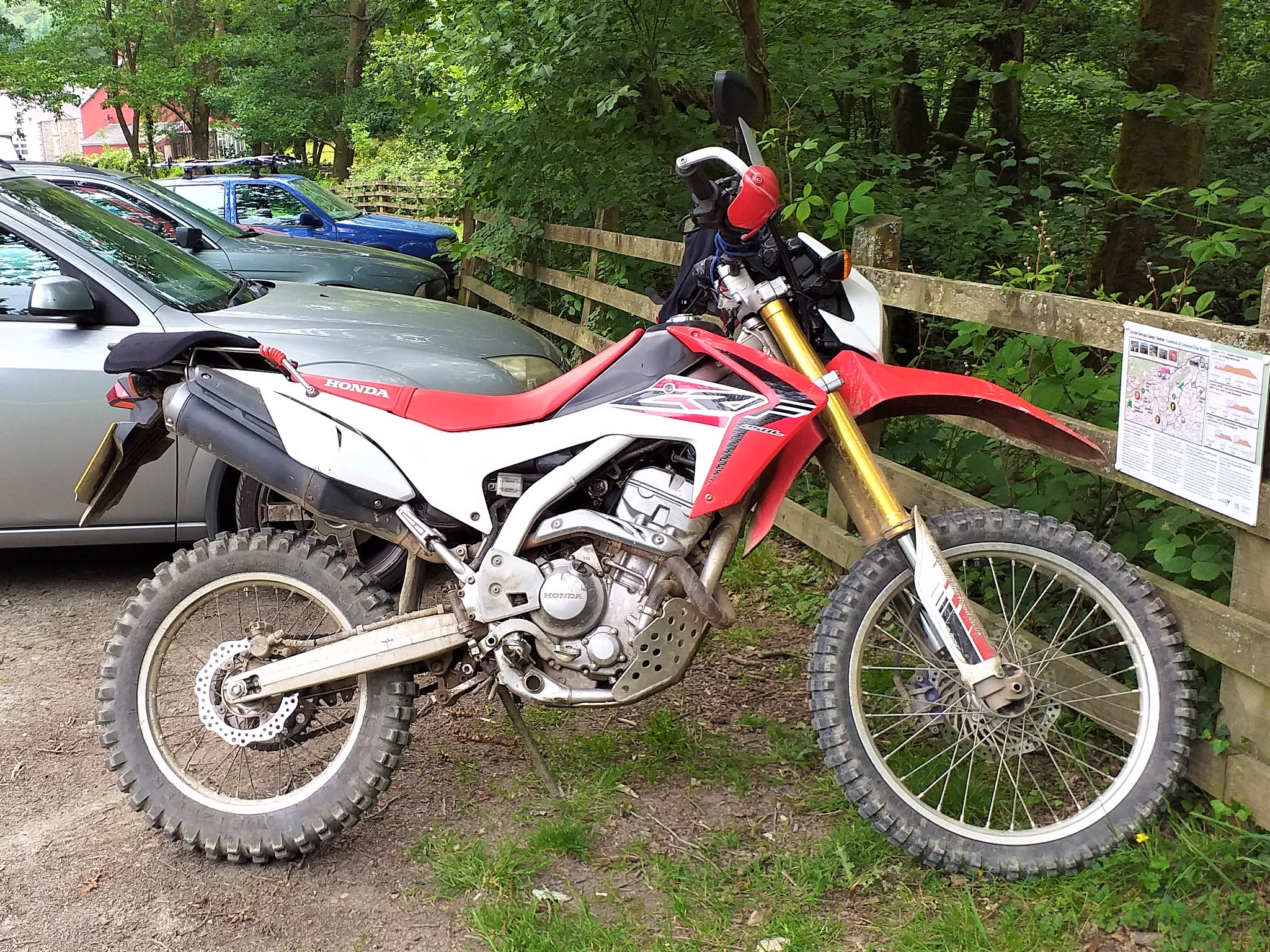 NOT recommended ... the size waas too big .. so as well as smaller swingarm clearance, despite its written size, the radius was an inch taller, making the rear wheel into a 20" diameter , which is useless at gripping in loose gravel or anything else .... i found out the hard way that Honda got it right with their oem recvommendations for tyres sizes .. a smaller rear tyre cuts into and grips better.


i had an army special on the front it was ok but a bit vague .. better to have the oem narrower profile.


I came to realise that smaller square knobs with 50/50 land sea gaps layout are the best for more techinical trails ... but thay mean slower speds on tarmac, if you want to get value out of the tyre cost, not to mention the poor handling

so it is ballancing one need against another, as in all tyre choices ... probably the only difference with the crf250L is that it has more wieght and less power than the average so perhaps that makes tyre choice more critical, as it is a very accomplished DUAL use bike, meaning you have a wider choice.

so mt21 will start at half way house, general use, but the off road performance will meed upping to enjoy trails, meaning a more aggressive tyre.

but it is a fair road bike too ... and could go all day on road tyres... but then there are better road bikes for that?

it is a difficult choice, but easy if you know where you want to ride, in one type of terain.

ps .. i just realised .. it out spreads in range, any single tyre
Top

Thanks Gary - that's just what happened to Ian yesterday. The gaps between the blocks just clogged up and he effectively had a slick tyre. On one uphill mudfest he was just spinning immobile while those of us on proper knobblies could literally ride in a circle around him.

He needs total off-road knobblies for the stuff we do, not a 50/50 compromise tyre. When we do a dirt day it's usually 90 or 95% off-road with just a minute of tarmac lane to connect up very occasionally. We do about 4 or 5 hours like that. The tyres don't need to work on the road.
Top

yes, Dave .. for off road its full nobblies or slip away, really.

I tried the `one bike do it all` thing, with a ttr600, but it was a no no over 70mph on the road, great suspension off road, but the tyres were a limiting factor if used a a dual purpose bike, slippy off road and wear quick on road. ... I had some hairy moments both off road and on tarmac ... some very close calls.

I still persisted with the CRF250L, as i found my then new road bike to be a bit boring, but again the limitations of 50/50 tyres drove me to get more and more aggressive tyres, so that i ended up with a a compromise dual bike, with low power and heavy weight, trying to do more technical stuff, while struggling to ride properly on tarmac .. which again gave some dangerous situations (overtaking on bends with a slow bike; slipping on greasy rocks in the forest).

.. sounds mad, but turned out to be quite fortuitous, pre imminent lockdown

I think trail riding, in Wales anyway, needs a van and a small proper trail/enduro bike .. and road work needs a proper road bike. The distances to proper trails, in mid wales for example (80 miles there, and 100 miles back, make raod work a real pain, literally, on nobblies lol .... and that is in the welsh rain and cold, on a hard seat. ....... a big van with a good heater never seemed so appealing.
Top

Yeah, I'm not a compromise rider. When I went touring it was on a sports bike so that I could enjoy the twisties. I'd prefer to suffer the wrists and back ache on the way there to have the handling up in the hills.

Same with off-road. I'm pretty sure that if he keeps coming out to play with us Ian will start looking at buying a full enduro bike. The CRF is excellent, I really like it, but it has its limits and on days like yesterday he is finding them! Give me a van and a proper enduro bike any day.

In the meantime I think Ian should look for a spare pair of wheels permanently shod with full knobblies, and just change between them as necessary.
Top
Post Reply
18 posts