Be extra careful with a derestricted ebike.... strictly speaking it should be registered, taxed & insured as it's legally a motorcycle! I say this having looked into derestricting mine but didn't fancy the consequences if things go pear-shaped

I should have said that it’s got a discrete button on the handlebar power module that puts it back into standard mode and limits it to 15mph top speed. It’s also a pedal only motor so there’s no throttle and I reckon it would take a well clued up plod to realise it was de restricted.
Yamaha Tracer 900...the KTM 450 EXC-R has gone
Top

Scott_rider wrote: ↑
Sun Apr 19, 2020 8:35 pm
I should have said that it’s got a discrete button on the handlebar power module that puts it back into standard mode and limits it to 15mph top speed. It’s also a pedal only motor so there’s no throttle and I reckon it would take a well clued up plod to realise it was de restricted.

scooby wrote: ↑
Thu Feb 06, 2020 8:14 pm
HI, is there anyone on the forum have or used a Specialized Turbo Levo MTB ? my wife is thinking of buying one and we cant find any good reviews apart from stuff written by Specialized.
Were mostly interested in range on a charge and is it worth buying or will she be better off staying with a normal MTB and just build up her fitness again.
Thanks in advance.

There's one up for sale on ukgser. £4k or thereabouts
Top

Be careful when buying 2nd hand bikes, Most don't come with any warranty as that only applies to the original buyer. Specialized are the only ones i know who do offer a warranty on bikes purchased after 2018.
Look around for the similar bike and you will probably find the same or newer model for not much more.
Cant understand how people are asking silly money for 2 hand without warranty. Motors, batteries and other bits go wrong so you could end up paying a lot more .
Top

Just over year ago I dipped my toe into the E-mtb world with a 250w Bafang kit onto my old Canondale hardtail, it worked well enough on roads and smooth trails but was less good on bumpier trails/bridleways, so after a bit of research I found a unwanted mtb Xmas present for a bargain price and transferred the Bafang kit over. It has been brillaint, gives a very easy 60+ mile range and rides virtually like the unkitted bike.
Over the year I've added a better quality and slightly smaller chainring, a gear sensor to momentarily cut power when changing gear, fork seal savers, modded some mudguards that actually work, a better seat and some Schwalbe Land-cruiser 50/50 tyres. The OE knobbly tyres would puncture on every other ride, were noisy on road and suck power, these put the power down on roads and hard pack and lose little on muddy stuff.

I'll be the first to admit the bike will not be as good as something like a Specialized Levo, but it has only cost just over £1000 and is not that far behind. One day out I met a family whose son had a dedicated full suspension Emtb with a Bosch motor, we swapped bikes for a bit. Yes their bike was a bit better but they were also very impressed with the bolt on kit.

It works for me doing roads, trails, bridleways etc and has been a God send in the current situation. 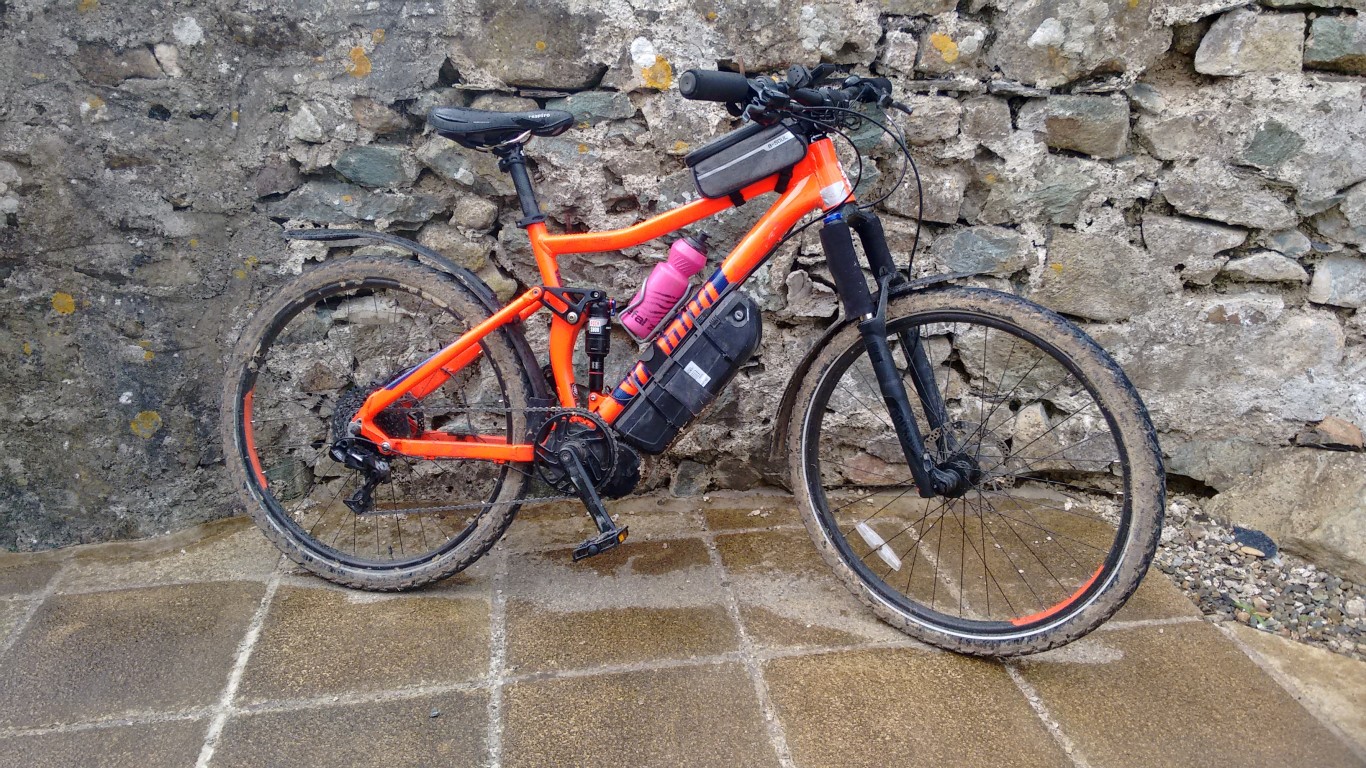 That's a route ive thought about going down, making my own E-MTB.
Top


The frame shape did present a challenge and I couldn't fit the conventional battery, but the seat-post mounting is working fine, and you don't notice the weight as much as expected - with full suspension and electric you tend to sit more anyway.

This bike has fairly long travel and even the seat mounting only leaves a few mm clearance at full compression. The forks also mean the front wheel goes close to the frame at full travel.

It is an absolute joy travelling at 15 or so mph average in total silence, it will be interesting to see how my enthusiasm is once I can use the motorised versions again, but this has opened up whole new riding areas and I expect I will want to continue....
- Steve

I will have a look on eBay and see what kits I can find, ive been mountainbiking for about 25 years and love it , ive been on some more technical greenlanes on the MTB faster than on my trail bike plus of course you can pick it up and carry it cant do that with a GS1200 or TT600 , as you say it does open up more areas for riding.
Top
Post Reply
100 posts

Users browsing this forum: No registered users and 153 guests