Mad Hatter wrote:I've been looking at the manual ones for a while but i managed to find a tuaratec electric one second hand not far off the same price and the Mrs said get it so i did :laugh:

As for events, I'm not really sure yet, I've got delusions of competence about my off road abilities but complete faith in my stupidity and ability to turn my brain off, it makes me attempt stuff that when my brain is switched on i I own is a bad idea :woohoo: that said i know I'm never going to do the Dakar, but i think I'll never rest easy until I at least try a proper rally but everything starts in stages so something relatively easy and relatively cheap. Relative being the word there because this stuff is expensive.

Its more just another step to my inescapable need to farkle. I've loved the look of rally bikes forever and a day and I've always wanted one so slowly but surely I'm planning on building a cheap imatation :whistle: but I'm from a manufacturing background and trained in electronics and machining, I've got access to a lot of kit and knowledge and as i work nights covering only for breakdowns end up with a lot of time on my hands and a fully kitted out workshop

It also builds another step into my normal riding, i hate planning anything, except for routes that's my thing really and i normally pick good ones (or at least that's what other people tell me when they're trying to be polite).

As for trips and stuff I've got old phones lying around that will run the apps for them so that's not a big thing atm, but I've got a lot of curiosity about the kit and how its made, like i said I'm from a manufacturing background but i had some sales and purchasing experience thrown in and it makes me wonder about the stuff i buy or at least look at, i know the most part of the prices for this stuff is extensive testing, or at least i hope it is :laugh:

As a great introduction to Road Book Rallies you could do a hell of a lot worse than The Tour of Portugal Rally. I did it this year on my KTM690. An absolutely cracking time. Superb roadbooks set in superb terrain based at a super wife friendly hotel. And as for value for money..........entry, bike transport to and from the UK, accomodation inc breakfast and dinner........all for around a grand.

Have a look at rallymoto.co.uk
Top

For rally use a manual road book holder would be a right PITA I would say, and an ICO (or equivalent) will be a million times better than trying to use your standard trip meter.
Top

I found that a decent manual one is fine. I made a couple out of electrical project boxes--clear top, rubber seal, and screws replaced with wing nuts. Back lit with a LED strip--these took 17 A4 page lengths for the MCC Exeter (me on the Yam and my son on a classic (proper) R80 G/S--and through the night and rain--no problem--you can wind on and back easily in seconds. The "support I also made--and it took an extra LED flood for the night sections.

Is there many road book events in the northwest?
Steve
Top

Fellas, a word to the wise, you can't/shouldnt do a competetive roadbook event with a manual roadbook holder, it's too difficult and too dangerous.

I have several GZ switches which are new, £140 plus post 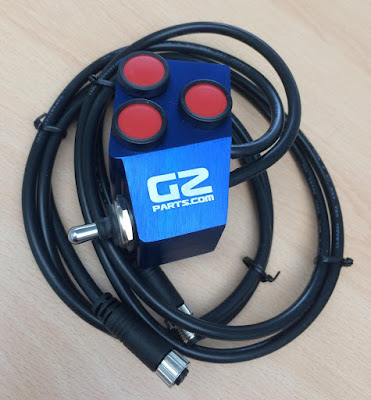 Fellas, a word to the wise, you can't/shouldnt do a competetive roadbook event with a manual roadbook holder, it's too difficult and too dangerous.

I have several GZ switches which are new, £140 plus post

Bugger, I've enjoyed the few I've done but I hate travelling miles to do them.
Them switches look nice though.

Mike54 wrote:
Fellas, a word to the wise, you can't/shouldnt do a competetive roadbook event with a manual roadbook holder, it's too difficult and too dangerous.

Competitive event, most of us are happy to dodder around and finish events for the joy of being there, if the difference between people turning up or not is the cost the kit you can can buy a viable manual roadbook kit for less than £100. Having said that it does look cooler with all the bells and whistles

Mad Hatter wrote:I've been looking at the manual ones for a while but i managed to find a tuaratec electric one second hand not far off the same price and the Mrs said get it so i did :laugh: